We’re about a month into the summer and the heat’s just not letting up. We all know what that means: everyone’s been kicking their AC into overdrive and spinning their ceiling fans at top speed for weeks now. Not only does cooling your home like that rack up unnecessarily huge power bills, it makes it super hard for you to keep your home at a comfortable temperature. After all, the only thing as bad as sweating in your own home in the middle of summer is having to wear a parka in it.

Luckily, there are a few tricks you can use to get the most out of your ceiling fans so you can cool it a bit with the air conditioning and save money in comfort.

It’s probably not a surprise to you that the blades of a ceiling fan are curved at an angle so that, as they spin, they can cut through the air and move it around efficiently. This trait of fans does create an unusual side-effect, however. If your fan blades, viewed from below, are spinning clockwise, your fan is pulling air up from below. While this setting does create a minor cooling effect, it’s better used during the winter for circulation of comfortable air throughout a space. During the hot months you want to be sure you have your fans set so that they spin counterclockwise. A ceiling fan spinning counterclockwise will push air directly downwards, creating a breezier air flow and cooling you much more effectively. 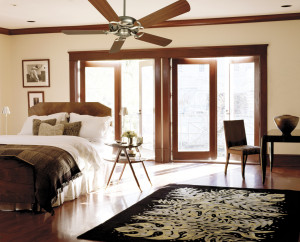 actly what it says on the tin: it conditions the air itself in a room. The average air temperature of a room is what air conditioning seeks to regulate, which is what leads to our homes becoming freezing by dropping the thermostat even a few degrees. Ceiling fans don’t actually change the temperature of the room much at all, they simply cool people that are within their range through a breezy wind-chill effect, the type of thing that causes “feels like” temperatures to be so different from the actual temperature outside. This means that, while an AC might take hours straight of running to cool your home down, a fan only takes moments of running for you to feel the effects. Taking advantage of this lets you run your fans (and your AC) much less consistently while still maintaining a comfortable feeling temperature in your living area.

3. Your Fan is your AC’s Best Friend

This all might seem like it’s been a little harsh to air conditioning, but that’s not the intention at all. People tend so much to rely only on their air conditioning and it results in them paying so much more each month to end up freezing themselves or constantly having to adjust the thermostat to stay comfortable. The reason we still use ceiling fans is because they’re still a vital part of the cooling system. When used properly, and to their fullest potential, they help you hit that perfect level of cool comfort without overworking your air conditioning unit. Staying smart and cool isn’t a question of either ceiling fans or air conditioning, it’s a matter of having them both work together in tandem.

Inspired to revitalize your ceiling fan style? Or maybe you’ve just been in need of an upgrade for a while? At Yale Lighting Concepts & Design we offer a huge selection of lighting integrated ceiling fan styles to choose from. Contact us today to learn more!